Piper is a character is Pixar's latest short film featured before the showing of Finding Dory.  This 6-minute silent-film will leave a lasting impression as Piper is navigating the learning process with his Mom right by his side.

The film begins with Piper clinging to his mom, as she encourages him to go out to find his own food. Reluctant, Piper just stands there, opening and closing his mouth, while watching his mom find food. Piper, finally becomes brave enough and runs toward his mom, which is also straight for the ocean. Waves are coming and going, when Piper models his mom's actions and looks for bubbles in the sand. Not too long after some confidence is gained, a big wave rushes to shore and sweeps Piper right off of his feet. Piper becomes afraid of the water once more.

Piper notices several hermit crabs running to shore, and when the water covers them, they bury themselves in the sand... A curious Piper tries this strategy out and is successful. Piper is faced with another wave that causes him to tumble and flip, but this time, he opened his eyes and what he saw was a magical sight. Food everywhere.  After this experience, there was no stopping Piper from being independent and finding his own food.

We have to be that push for our students. We cannot do everything for them. We must instill independence through expectations. Piper only ventured out to his mom because he realized she wasn't going to come back to his comfort zone and feed him.

Modeling is imperative. Our students are watching every move we make, from our interactions with our colleagues, to our reactions.  Piper's mom modeled exactly what she wanted Piper to do to be successful at collecting is own food. Set backs are the path to growth. Piper's mom never left his side when the wave toppled him. She continued to push him out of his comfort zone and lure him out to shore with the rest of the birds. She didn't give up on him.

As we know, all students learn in different ways. Just like Piper, our students are going to learn the way that they learn best... only if we give them multiple choices. Piper's mom was okay with him not following exactly in her footsteps. 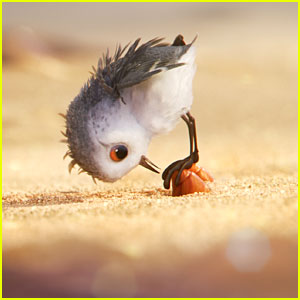 Our students need to have confidence in themselves and the choices that they make.  This confidence will only persevere if we are continually listening to their voices.  Piper found something that worked for him (burring himself in the sand for stability) so, he became confident.

Students opening their eyes to the real-life possibilities. They long for the treasure (outcome). They set goals and develop action plans.  Piper knew exactly what was available to him because he opened his eyes.

Once students are fully engaged, there is no stopping them (unless it is lunch or recess)!  They will want (not have to) to continue to work and put their whole being into the task at hand. Piper wouldn't stop collecting all the clams that he saw.

Our students need to feel accomplishment. They not only need to feel it from us, but from the school, their parents, and their communities.  At the end of the day, Piper was ecstatic at all he had accomplished, and there to celebrate with him, was his mom.


I know this post is common sense, but what a great example of learning for our students and reminder for us. So often, we get sucked in by the standards, or the have-to's, that we skip over the real meaning of why the students are there and why we are there. Popular posts from this blog

February 05, 2017
***A special thank you to Eminence Independent Schools, Thom Coffee and James Allen.*** Galileo Galilei, Hellen Keller, Rosa Parks, Martin Luther King Jr.,  Amelia Earhart, Mahatma Gandhi, Harriet Tubman... What do all of these people have in common? They all made an impact on our world today because of their bravery.  A quick search on Google led me to these results... When searching the word "brave"... 279 billion results 9.9 million videos 10.9 million news articles 1.8 million books 2 million movies The word "Brave" is nothing new to this world... However, scientist are still trying to unravel the mystery of bravery within humans.  Are we born with it? Is it learned? Can it be increased? A little bit of science for you... According to the article, What Makes Someone Brave, "bravery emerges from a primal struggle between the brain’s decision-making hub, the prefrontal cortex, and the focal point of fear, the amygdala." The ar
Read more 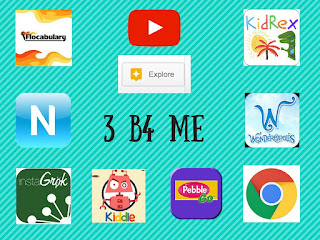 How much do our students REALLY need us? I believe there are 5 rules you must follow to allow your students to S.O.A.R. Rule 1: Tick-Tock, Tick-Tock It is all about timing.  Many times we step in too early in the exploration process. Let them have a chance to explore! We live in a time where patience is slowly disappearing.  Think about it... when you are in a fast food drive through, when you forgot something at home, when you have 2 items to checkout in Walmart... My Suggestion This is one way that I remind myself to allow the students TIME... This is my techy poster... This is a mixture of techy and talk... Rule 2: Who Are You? We must KNOW our students.  They are all different in their own ways.   When will they reach the edge?  How do they feel about failure?  What is their tolerance level? Where are they on the "needy" spectrum? My Suggestion Challenge them. Observe them. Place them in "character-telling" situations. H
Read more

Motivated By Their Passion

I could not wait to post this challenge! It's a scary one, but rewarding one! Here is a little history. Omar and Colton are typical boys. Omar is one of the most respectful kids I have ever met, and Colton is one of the most zealous and curious kids I have ever met...but putting them together on a project can be risky. Well both of them, being friends, chose to build something magnetic for their passion project.   I could already tell where this was going. Long story short, they ended up grouping themselves to work together.  Like any loving teacher would do, I discussed with them the risks of this pairing and gave them the choice: to stay and work together or continue on their separate paths... Without any thought... The boys EXCITEDLY chose to take the path together. Now. Three months later, a passion project in the making, they are more motivated and driven than I have ever seen them. But why? I strongly believe they are being motivated by their passion: building a
Read more